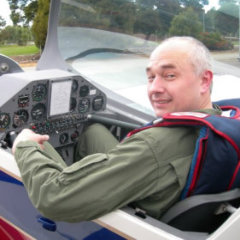 I learned to fly gliders back in Lithuania a few years before I was ever a passenger on a plane. I am a physicist (MS) by training but left a couple of PhD programs behind (and a few countries) in search of a better life in the USA. That’s how I began my adventure in Silicon Valley in 1998. I drove to the local airport a few weeks after arriving and started my flying lessons. I earned my PPL a half year later, then Commercial and CFI in 2001. While designing ultrafast lasers for close to 20 years, I was instructing part time and flying aerobatics for fun and competitions. In 2017, I decided to follow my passion full time and trade the laser laboratory for an office in the sky. Finally, I have something to tell my teacher who used to say that nobody would ever pay me to look out the window.

I highly recommended starting to fly in a taildragger and then transitioning to something that better “fits” your style of flying.

If you see me in a green Air Force flight suit, it means that I will be looping, rolling, and snapping my Yak later in the day. See you around!